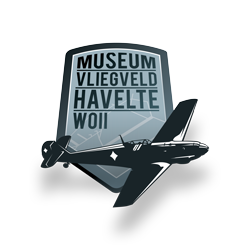 To intercept allied bombers, the German Airforce (Luftwaffe) in the occupied Netherlands, required an (back up) airfield in the northern part of the Netherlands.
In 1935, the KLM (Royal Netherlands Airline) already had plans for an airfield in Havelte, in the event Schiphol would become too busy. The German Airforce utilised the plans made by the KLM and in 1942, they started the construction of Flugplatz Steenwijk, as they named the airfield in Havelte.
5800 People worked on the airfield at the height of its construction. They were either working for local building companies or volunteers from the Reichsarbeitsdienst or members of the National-Socialist Party (NSB). Forced labour was also used. Thousands of Jews, prisoners and men who were caught during raids, were forced to work in Havelte.
In December 1944, 800 people from Amsterdam came to Havelte for work: here they received payment and food, where in Amsterdam, they had nothing…

The runway was built in an east-west direction. It was 1400 meters long and 80 meters wide. On a 60 cm thick layer of sand, gravel and a drainage system, two layers of paving stones were used for the runway.
Mines were planted underneath the runway in 124 places, in preparation of an attack by Allied Ground Forces.
The roads from the hangars to the runway (rolbanen in Dutch) consisted of one layer of paving stones and also a drainage system.
The first plane, with General der flieger Christiansen on board, landed on the 25th of June, 1943. General Christiansen was the Supreme Commander of the German Forces in the occupied Netherlands.
Mid 1944, construction of a second runway started. This runway was longer (1600 meters), probably due to the arrival of the Messerschmitt 262 jet-aircraft, which required a longer runway and landing strip. This construction was never finished due to advancing Allied Forces.
The last aircraft to use the airfield landed the 17th of April 1945, with HRH Prince Bernhard on board.

For the construction of the airfield, special railway tracks were built.
The railway started at the railway between Meppel and Steenwijk and via the forest nearby Havelterberg, it ended in Havelte.
The 70 cm (light) and 90 cm (heavy) tracks were used to transport sand, gravel and stones to the construction location. After the liberation in May 1945, 10 kms of tracks, 36 locomotives and 262 tippers were found.

Close to the airfield there were 2 prehistoric graves (hunebedden in Dutch), named D53 and D54. These graves hindered taxiing German aircraft, but could also be used by allied pilots as landmarks. The German Commander ordered the graves to be removed. Next to the biggest grave (D54) a deep pit was dug. Almost 50 stones, some more than 16 000 kgs, were thrown into this pit. The D53 was covered with sand.
After the war, both prehistoric graves were returned to their former condition.

There is no other place in the Netherlands that was bombed as heavily, as Havelte. More bombs were dropped on Havelte than on Rotterdam. After the war, 6000 bomb craters were counted, hundreds of which are still visible in the area.
It is Assumed that 10% of the bombs which were dropped, did not explode. Some were found and defused and occasionally, some are still found today.
As far as we know, 11 local people and workers were killed during the bombings of the airfield. The amount of German casualties are unkown, but are likely much higher.
The airfield has been bombed dozens of times. 2 bombings in particular, stand out: the bombing on the 17th of September 1944 (prior to Operation Market Garden) and the one on 24th March 1945 (for the Operations Plunder and Varsity.
The purpose of these bombings was to prevent that German fighter aircraft from taking off and intercepting allied planes, loaded with Paratroopers.
Following the bombings, the airfield was severely damaged and could not be used for a long time.